I’ve been busy reading quite a bit. Finally finished the Poppy Wars trilogy, and that’s all I’m going to say. Also got to read Scott Anderson’s fantastic The Quiet Americans: Four CIA Spies at the Dawn of the Cold War--a Tragedy in Three Acts, and before that I finished America for Americans. I also dug into two books I’ve had on my To Be Read list for a while, The Bone and Sinew of the Land: America's Forgotten Black Pioneers and the Struggle for Equality and New Worlds for All:Indians, Europeans, and the Remaking of Early America. When I finally dug into those, I wondered why I’d waited so long: not only were their lengths very manageable (less than 400 pages), but they were so good. Weirdly for me, I acquired We Have Been Harmonized: Life in China's Surveillance State almost as soon as I heard about it, in part because it’s a subject one of my sons has been obsessed with for about two years now. It was good, but by the second-to-last chapter I felt like the author had made his point and I was just waiting for it to end. 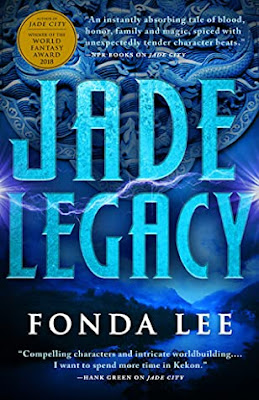 Now finally digging into Beasts Made of Night, which is a needed departure from some of the fiction I’ve been reading recently, and trying to get through To Hold Up the Sky, Cixin Liu’s latest release of short stories. My reading goal this year is to get through my library Holds list (seven items as of now), then my For Later shelf (nineteen items as of now, but two of them are movies and three I can't touch until the libraries are open to the public again), and then move onto the books sitting on my piano, including a re-read of The Fifth Season, The Hidden Girl and Other Stories, Ken Liu’s latest short story collection, and Monkey, one of the many versions of Journey to the West. Ah, but then there is the newest Brunetti, Ken Liu’s third installment of the Dandelion Dynasty, and most especially, Fonda Lee’s Jade Legacy. Twenty-six books to look forward to. This should be a good year.

Posted by Deborah Nam-Krane at 6:00 AM