It Started With A Kiss by Lindy Dale (Excerpt and Giveaway) 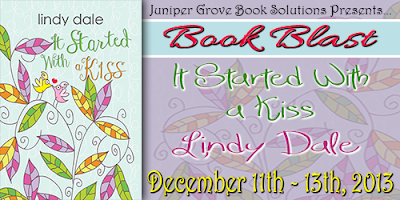 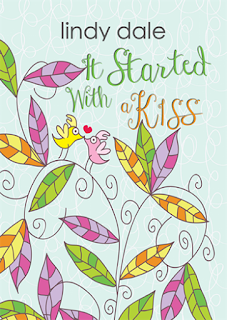 Title: It Started With a Kiss
Author:  Lindy Dale
Published: October 10th, 2013
Publisher:  Secret Creek Press
Word Count:  21,000
Genre:  Contemporary Women's Fiction/ Chick Lit
Synopsis:
Out for a jog one Saturday afternoon, Georgie Bird is greeted by two things she never expected to see ~ a huge lump of dog doings on the sole of her shoe and her old boyfriend Nate. Nate and Georgie had been the only peas in the pod growing up and in the twelve years since they’ve seen each other, neither of them seems to have forgotten. Over a cup of coffee and a series of shared recollections, Georgie and Nate begin to rekindle the embers of the love they lost.
But can they save the relationship or will their one night of passion bring the closure they never had?

Excerpt from IT STARTED WITH A KISS

“You don’t remember me, do you?”
Nate peered at her closely. He was struggling for recognition that she could see wasn’t coming.
Georgie removed her sunglasses and cap. Her ponytail swung carelessly and flopped over her shoulder as she looked into his eyes, trying to trigger his memory. He had to remember her. It would be soul destroying if he didn’t. Not to mention, more humiliating than having her name and some rather untrue accusations plastered on the boys’ toilet wall in her last year of school. One of the male teachers had seen it first. When he’d confronted her, Georgie didn’t know whether to be embarrassed about the fact that it was there, or that she had no idea what the lewd action mentioned was. Georgie and Nate had been together a long time. He’d kept her sheltered.
“It’s me,” Georgie said, hoping that if she stared straight into Nate’s eyes he’d remember. It was either that or run. If she did that, his only memory would be of the kooky chick that’d stopped him on the bike track thinking they knew each other. She’d be an amusing story to recall at dinner parties.
Nate looked again. Then visibly, his face began to change. There was a small glimmering hint of recognition and he was trying to hide it but Georgie saw it. She’d always been good at reading his expressions.
“Georgie?”
Georgie almost collapsed with relief. “Yes.”
Nate’s face burst into the grin she remembered so well. He flicked his sunglasses to the top of his head and rubbed his hand over his face in disbelief. Mischief wrestled in his eyes, just as it had when they were young.
“I can’t believe it. Jesus, how long’s it been?”
Georgie could see him mentally calculating the time.
“Twelve years.”
If you rounded off the three months, five days and oh, two hours.
Nate’s grin broadened, as he looked her up and down, taking in her soggy, ripped leggings, sweaty tank top and missing shoe.
“You’re still a fashion plate, then?”
“Don’t be smart. I stepped in dog poop.”
“I wondered what that smell was. I, sort of, remember your perfume being a heap nicer than that.”
“Sorry. I was trying to get rid of it when I saw you.”
“By taking a dip in the river? I gather that’s how you got so wet or do you sweat a lot when you run?”
Georgie glared at him, remembering how he’d always had an answer for everything.  Once upon a time it used to be endearing, funny even. Now, it was plain annoying. Sort of. God, Nate was here. Here. This was unbelievable. 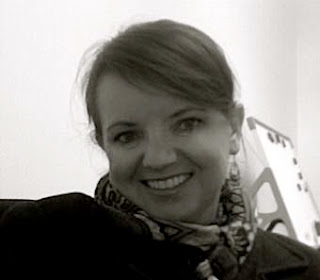 About the Author:
Lindy has lived on an acreage in country Western Australia for the past two years, after moving from the big city of Perth. She shares this laid back lifestyle with her long suffering and handsome husband, Big G, her two dogs and a flock of sheep named after the Brady Bunch characters. She also has two fabulously talented children who are pursuing their own creative careers and will one day be famous! Lindy began writing at University but never really wanted  to be 'an author'. She wanted to be a Princess or at worst a Kindergarten teacher. Her first novel, Heart of Glass was penned in 2007 and since then she has developed her voice as a Chick Lit and Women's Fiction author. Her greatest achievement to date is having a Top Five Bestseller on the Short Stories List with Amazon early in 2013. Filled with hilarious and sweet moments the novella, A Cupid Kind of Day, is a good representation of Lindy's hunorous writing style.On a good day ~ when not at her day job teaching literacy ~ you can find Lindy lurking around Twitter and Facebook generally seeing how much useless information she can impart in 140 characters or less. She's a hopeless U2 and Bon Jovi fan, a rugby union fanatic, coffee lover, chocoholic, over-exaggerator, trashy TV, music and iPhone addict. If you can't Google it then it's not worth knowing!
Amazon Author Page | Facebook | Twitter | GoodReads | Website

Giveaway Details:
There is an International tour wide giveaway.  The Prize is: