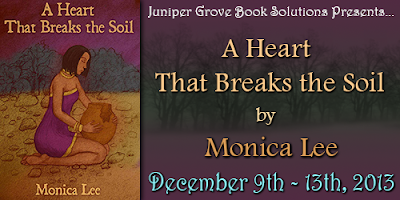 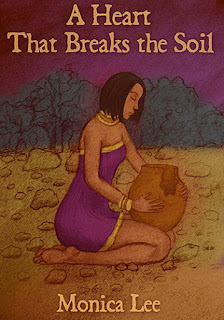 Title:   A Heart That Breaks the Soil
Author: Monica Lee
Published:  September 2013
Word Count:  95,000
Genre:  Contemporary Fiction
Synopsis:
Mandy held on to hope that her husband and her situation would change as she tried to honour her commitment despite all signs pointing to this being an unworkable marriage.  A Heart That Breaks the Soil takes you across the vast expanses of Africa and into the insecure realm of the human psyche.

This is the story of how one woman struggled to find her way in the search for that one coveted destination: a happy life.  It is Mandy’s story but it will become yours as well as you enter her world of trials and deep sadness, mixed in with humour, friendship and love.

Excerpt:
Mandy could hear Winston in the background saying good- bye to his relatives. He then turned to Mandy. “Are you coming or would you like to stay behind?” he asked in a very pleasant voice. The relatives around him burst into laughter at hearing him joke so lightly. Mandy hastily fell into step and together they walked back to the car, and she was the only one who knew he wasn’t joking.

Mandy’s sisters said she looked stunning that afternoon at the registration office. She wore a lilac skirt with a well-fitting silk band, which enhanced her slender waist; the skirt fell elegantly to the floor. A snow-white bodice to accent the lilac skirt showed off her full bust. Her hat was a deeper purple with white and lilac ribbons that gave her an enchanting look.

Driving back in silence after tying the knot was something you don’t see in movies because movies are a fairy tale fantasy; this was real. Mandy could tell by his breathing that he was still very tense. When they got home, he jumped out of the car before it ground to a halt and rushed into the house. Just as he was throw- ing the wedding ring into the kitchen bin, Mandy walked in.

Was that where their symbol of marriage would lie? Looking at the ring lying on top of the rubbish, she reached to pick it up but a second thought overrode her instinct to retrieve it.


Are women in Africa tolerated or loved? by Monica Lee

Tradition plays a big role in African society and gender inequality is still prevalent. When I say tradition I think this needs to be qualified somewhat. Two or three hundred years ago men and women had well defined roles but lived in a village setting. The high standing of the man was accompanied by responsibilities and he was held accountable for his actions to the wider tribe. Whilst I do not wish to return to this kind of system it was one, which had developed over generations and was in harmony with the circumstances under which they lived. Nowadays African men in my opinion tend to take the parts of traditional culture they want whilst embracing western values they find appealing. Women are expected to serve and any show of weariness in this area can spell trouble in a marriage.
When a woman marries a man the custom is that she marries into his family. This means she is expected to look after her parents in law and other dependents from her husband’s family. The husband’s family has a considerable say in how any children from the marriage are brought up and will even take over possession of the man’s belongings in the unfortunate event of his death. I suppose this can contribute to a feeling of not being loved and being relegated. A man has to show he is in charge to satisfy his relatives. This can result in the marriage becoming a power struggle where the man is fearful of losing his status. This can be particularly pronounced in cases where the woman is educated or has access to her own funds or a career.  Some women still have limited access to productive resources and employment. These are some of the reasons that contribute to unhappy marriages.  Especially when a woman depends solely on her spouse and do not have the means to earn a living.
In my opinion the role of a woman in a marriage in Africa remains the same regardless of the global outlook. Men are brought up traditionally to think household chores and bringing up children is a woman’s job. Their role is to earn money for the family and make decisions. Poverty, unemployment are some other reasons for unhappiness in marriages. Domestic violence is dealt with in unrealistic ways when reported. Women that suffer the most are women in the grass root level.
How can we work toward on improving things? Women need to stand together in the fight of women inequality and violence against women. Men need to be educated about paternal care and the sharing of responsibilities in marriages. As long as abusive husbands are condoned in society the fight for respect and dignity amongst women is a lost battle.
A heart that breaks the soil looks at these problems in a different light. Mandy is not aware of her own situation because others around her are treated in the same way. Her journey based on true life situations takes you into the inner psychological isolation of women living in abusive marriages.
Often you read about these cases and not much is done to address the issue.
http://www.huffingtonpost.com/2013/03/08/south-africa-violence-against-women_n_2837804.html 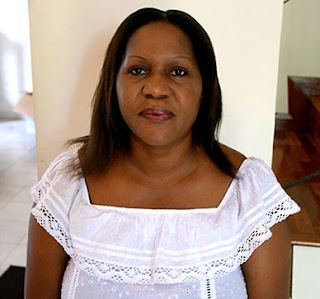 About the Author:
The author was born in Zambia. She spent years in England and Sweden as a young woman. For the last 20 year she has taught in an international school in Africa. Monica enjoys writing, cooking and reading. A Heart That Breaks the Soil - is her first contemporary fiction novel. She now lives and works in Asia with her husband and children. Monica is now writing her second book.

Giveaway Details:
There is an international tour wide giveaway. Prizes include the following:
a Rafflecopter giveaway

Posted by Anonymous at 9:23 AM