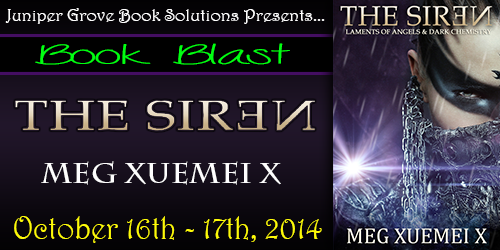 Synopsis:
Two boys tied to her irrevocably. One offers life disguised as death; the other leads to death with unfathomable love. Her choice decides whether the world turns or ends.

Lucienne Lam, born to rule as the last of the Sirens, is running out of time. If she fails to find the TimeDust, an ancient power, her enemies will have their wish–her head on a spike. And she’ll never know the love promised by Vladimir, a fierce warrior of the Czech royal bloodline.

Except Ashburn, a genius ‘farm boy,’ has found the TimeDust first, and its power binds Lucienne to him. She must convince him to sever this forced bond so she can return to her first love. But breaking the link seems insurmountable when the TimeDust launches its own ominous agenda and the two boys prepare to duel to the death over her.

Vladimir reacted instantly, catching her before she hit the wall. The impact drove them both to the ground. “I’m glad you’re on top,” said Vladimir with another groan. “I absorbed most of the hit.”
“That’s very kind of you.” Lucienne turned to Vladimir, their faces inches away. His warm breath and pheromone made her forget where she was. Rushing footsteps brought her to her senses.
“Vlad?”
“Yes, Lucia?” he whispered, his hands pressing against the small of her back.
“We’ve been discovered.”
“I know. But there’s no need for them to yell. That’s kind of rude.”
“They’re not yelling.”
“No, but they will.”

Meg Xuemei X is an award-winning author. She grew up in a backward, southern town in China, went to college in Akron, and dropped out from Tisch School.

She’s the author of Laments of Angels & Dark Chemistry series. Her science fiction novel, Ghost Star, was published by the China Federation of Literature Publishing House. Her romance novella, Dance with Your Enemy, won an International Editorial Award.

She lives in Sherman Oaks, California.

Widget HTML:
a Rafflecopter giveaway
Posted by Anonymous at 12:00 AM