Let's Move On is live! (Book Four of The New Pioneers)

These young women have been with me one way or another since I was barely a teen myself. I grew up with them, and it was my job to make sure they grew up. I hope you've enjoyed the ride...and rest up, because it's not over!

Special thanks to Erin Cawood for the gorgeous promotional materials. 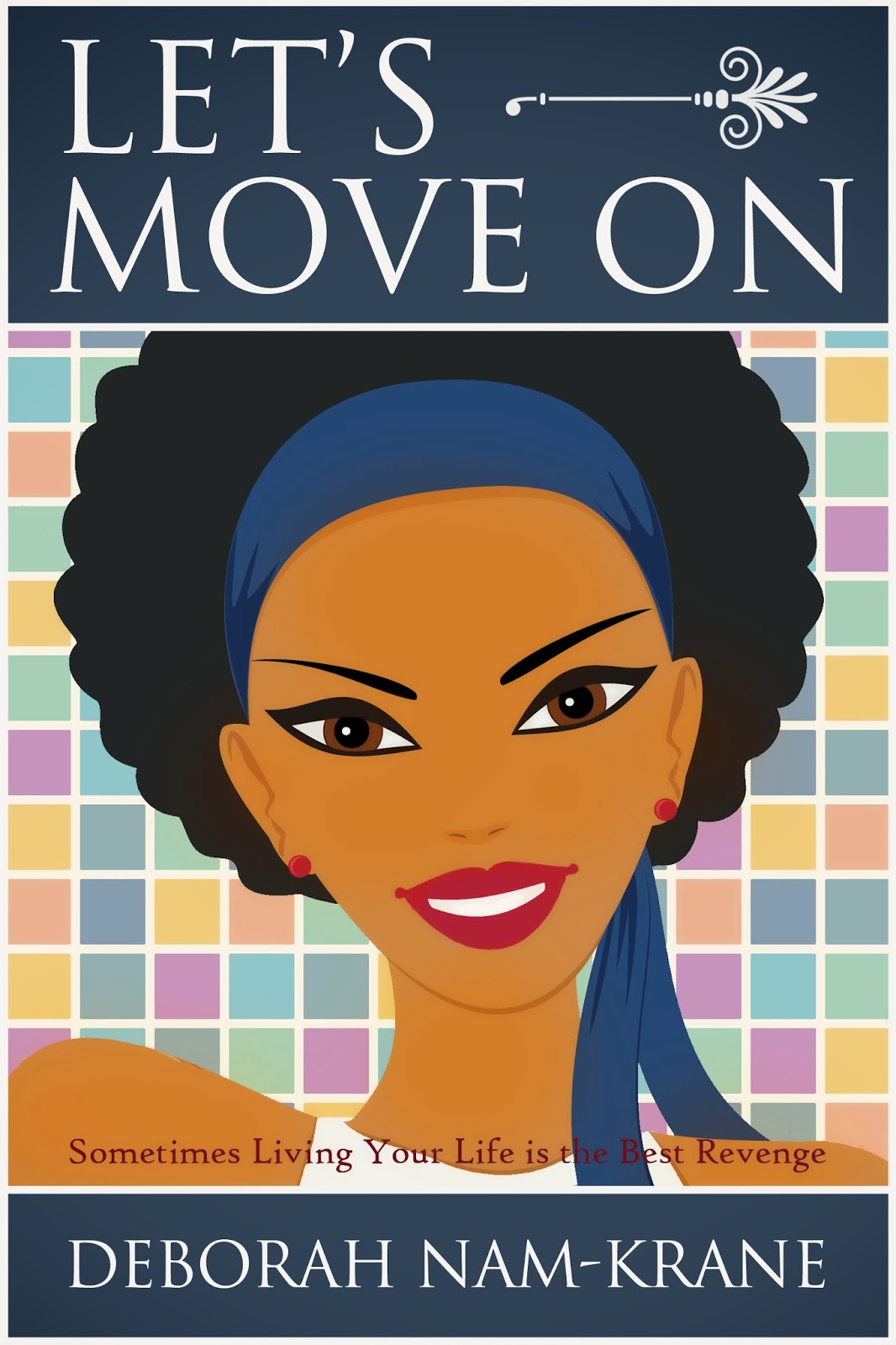 Zainab has spent years keeping Emily from going over the edge, giving Miranda a shoulder to cry on and nursing Jessie back to health. They'll be the first to agree that she deserves whatever makes her happy, especially after the drama Richard put her through. But did she have to choose the guy who threw everyone's lives into the shredder?

Richard knows he screwed up and he'd do anything to get Zainab back, but first he needs to make sure his company—and his loyal employees—don't go under. (Who knew kicking your primary investor to the curb would have consequences?) Good thing his family has such deep pockets; too bad he doesn't want to take a cent from them. Why should Zainab take him back if he can't get out of his own way?

Maybe Zainab can eat her cake and have it too—that is, until she's given an ultimatum. The choice isn't Lover A or B; it's protecting her friends or letting them fend for themselves. With that hanging over her head, what's it going to take to make sure she and everyone else can finally move on?

Zainab was laughing a few hours later as she stretched out in bed. "You continue to be full of surprises."
Robert rested his head on the pillow and took some deep breaths. "Come on, that wasn’t really a surprise, was it?"
"I don’t usually get that dressed up just to go to bed." She flipped over and smiled. "Or is that sort of a Catch-22? Would we not have ended up in bed if I hadn’t been so dressed up?"
Robert sighed. "I think you’re just trying to get me to admit that I had this planned."
"I know you’re intrusive, I don’t think you’re manipulative."
"What about your friends?"
"No, they’re not manipulative either, although at least one of them is intrusive at any given point—"
"I meant, what do they think of me?"
"You know exactly what they think of you, and I’d say it shouldn’t be something that should concern you."
"It doesn’t, except that I don’t like the idea of you leaving and then going to a house full of people who can’t stop telling you how wrong I am for you."
"First of all," she said, playing with his chin, "you’re getting really sloppy. Jessie isn’t living with me—"
"But she’s around enough—and no, I have not been driving by your house."
"Second of all, they have no idea."
"Really?" Robert said, smiling as he looked her over. "Because Emily is pretty sharp. Annoying, but sharp. Miranda could maybe use a little more time at school—"
"Miranda isn’t stupid."
"She just has lousy taste."
"Don’t we all?"
"If you think that, then why are you here?"
"Why shouldn’t I be, Robert?"
He smiled. "Because of Jessie. Because of everyone else. Because of Richard. Because to the untrained eye it might look like I broke you up on purpose—"
"I know that’s not what happened."
"So am I forgiven?"
"It’s not an issue."
"Why don’t you care?"
"What do you want? You want me to be really mad so you can have an excuse to feel bad? Do you think you should feel bad?"
"Let’s just say I don’t usually conduct my investigations that way."
Zainab raised her eyebrow. "I know you were here with Jessie."
"And that doesn’t bother you?"
"How bothered would you like me to be?"
"I don’t want you to be bothered, but I want you to care."
"Why? Do you care about Richard?"
"No, but I do think he can’t be nearly as smart as he thinks he is to let you go."
"He didn’t let me do anything—I left on my own. I was with him by choice."
He kissed her. "And now you’re with me. By choice."
"Now you’re getting the hang of it."
"So why did you choose me?"
"Because I like you, Robert. But why do we need to look at it so closely?"
He rolled on top of her. "True, when there are so many better things we could do with our time."

BOOK ONE
The Smartest Girl in the Room

BOOK TWO
The Family You Choose

Miranda Harel has been in love with her guardian Alex Sheldon since she was five years old, and Michael Abbot has despised them both for just as long. When Miranda finds out why she wants both men out of her life for good and questions everything she believed about where and who she came from. Finding out the truth will break her heart. Without family or true love, will her friends be enough to bring her back?

BOOK TWO AND A HALF
An Engagement: A New Pioneers Short Story

Annabelle Hendrickson always knew Alex Sheldon couldn't be trusted, but even she couldn't have guessed how far he was willing to go to get what he wanted.

No one was as decent as her brother Jim, but Stephen Abbot had a kind soul behind his mischief. She could accept his reprobate father- he'd be dead soon anyway- but she would never accept his longtime friendship with Alex, her father Gerald's ambitious employee. Annabelle knew it was just a matter of time before he stepped on someone she cared about.

What a pity she didn't realize who that person would be—and who was going to give him the opportunity.

What happened to Michael Abbot and Richard Hendrickson's parents in 1980 is going to affect everyone three decades later.

Hypocrisy, half truths and lies...

Sick of being treated like she's going to break, Jessie Bartolome is back to her old ways and calling everyone on their hypocrisy. Sheesh! One little breakdown and even easygoing Martin Shepard thinks she's too fragile to handle their age difference. Good thing her older and equally yummy teaching assistant Robert Lester thinks otherwise…right?

After spending so long cleaning up after everyone else, Jessie's cousin Richard has never had the time to start a life of his own. However had he managed to find his girlfriend Zainab? So what is Richard going to do now that everyone else has grown up? Marry Zainab and start a family? Things have never been that easy for a Hendrickson…just ask his cousin Michael.

Richard's mother, Lucy, is one of the most powerful women in Boston... so when is she going to put a stop to the blackmail ruthless Alex Sheldon has been holding over her for years? And if Richard knows more than he's letting on, why hasn't he gone after Alex himself? The question is, how much does he- or anyone else- really know?

Welcome to the Bartolome/Hendrickson family.

Deborah Nam-Krane is a writer living in Boston proper who has been storytelling since she was a little girl and writing those stories down since she was eight. Any given day will find her reading, writing, reviewing, editing and, just for fun, homeschooling her children.

Let's Move On is the fourth installment of the New Pioneers series, the sequel to The Smartest Girl in the Room (March 2013), The Family You Choose (September 2013), An Engagement: A New Pioneers Short Story (March 2014) and The China Doll (March 2014). Deborah is currently editing Book Five, The Golden Boy Returns. That book will be set in the world of Boston and Massachusetts politics, and her job will be to tone down the true stories she’s heard so they seem believable. And because she just can't stay away from her characters, she's already started working on the To Be Titled Book Six, a Romantic Suspense.

$10 Amazon gift card
5 copies of both The Smartest Girl in the Room and The Family You Choose
a Rafflecopter giveaway
Posted by Anonymous at 12:00 AM