After intermittently complaining about chest pains for most of my adult life, I finally looked sick enough the first Saturday in April to convince someone that I needed to be seen. The Emergency Department wasn't impressed--and doctors literally said that to me--until a blood test came back "not negative" and showed some damage had been done when I reported being nauseous, dizzy, and light-headed. Long story short (if only because I don't want to have to relive that weekend), it's probably something called a microvascular dysfunction. More angina (chest pains) than heart attack, but it can definitely take the wind out of you.

Since then, I've been binging on the eye- and mind-candy I've been trying to get away from since the end of last year: lots of Instagram, lots of Netflix. It also took me, no joke, about five weeks to be able to crack open a Donna Leon mystery (or anything else), but so far I don't have the same kind of voracious appetite to read that I used to.

But speaking of writing, yes, I still am! I'm over 110,000 words into this epic and people, I'm not even halfway through. I'm overwhelmed with what I put in front of myself, I'm terrified about all of the work I'll need to do to make sure everything is pulled together, and I'm still really excited. So, you know, same as every other project!

That's all for now. Until later, please enjoy the roses from my community garden. (Gosh, what a difference a little bit of deadheading last year made...) 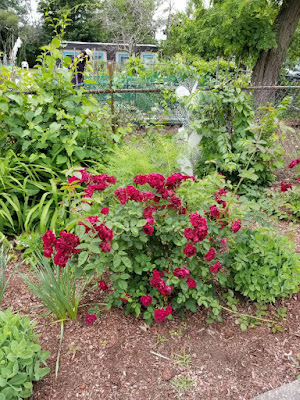 Posted by Deborah Nam-Krane at 2:10 PM