The Stupid Movie Blog Tour: The Man Who Knew Too Little

Here we are: this movie is the reason I wanted to do this tour. 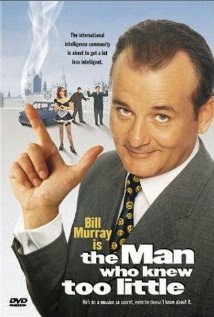 Unlike a lot of other stupid movies, no matter how good, the writing here wastes nothing. On top of that, every actor is hilarious, whether it's slapstick humor, straight guy/gal or confused bystander.

The plot is ridiculous. Wally (Bill Murray) is a wannabe actor who works in a video rental store in the States and decides to visit his brother James (Peter Gallagher) and his posh wife Barbara (Anna Chancellor) in London- unannounced. Great- except that the couple is having a very important dinner meeting with potential investors and James knows it's only a matter of time before Wally says something embarrassing. Solution: get him a ticket to participate in the Theatre of Life, a fictional adventure complete with guns and dangerous criminals, so he can act out his fantasies of being an actor AND be out of the house. It wouldn't be a Stupid Movie if an international conspiracy didn't cross its (phone) wires with the acting troupe; when Wally answers a phone call intended for a hit man and thinks it's part of the act, the fun begins!

Wally never once is clued into the fact that this is real, not when he encounters a gun-wielding mistress named Lori (Joanne Whalley), a real dead body (whom he thinks is another actor really committed to his role), a corrupt politician or an expert in torture. (The fact that he goes searching for the infamous Ludmilla Kropotkin and finds an elderly couple enjoying a little BDSM only enhances the absurdity of the set up- but it's hilarious). Even after James is tortured while trying to rescue his brother, Wally still believes that the whole thing is a very long act. He's not convinced otherwise when Boris (Alfred Molina), the assassin who has been stalking him all night, happily concedes his inferiority to him nor when he and Lori are approached the next day by an elite American espionage group to become an assassin for them. As far as he can tell, he's being invited to join an acting troupe! So they all live happily ever after...although you do wonder what's going to happen when he has to pull his first real "job".

Every scene in this movie is funny, although a different kind of funny: some of it is physical, some of it is mistaken identity, some of it is iconoclastic, and some of it is absurd. If you haven't already seen it, you need to go do that right now. Here's just a sampling of why:

"You gotta check and see just how dead they are."

In short, possibly the perfect Stupid Movie. (Why are you still reading this and not watching this right now?)

Thanks to everyone who's followed the Stupid Movie Adventure thus far. Be sure to see what else Caroline Fardig has up her sleeve on the 25th!
Posted by Anonymous at 12:00 AM