What Inspires a Story? by Tim Flanagan, author of The Curious Disappearance of Professor Brown, or The Pumpkins of Doom: A Lawrence Pinkley Mystery

What Inspires a Story?

If there is one thing I never have a problem with, it's finding inspiration for my writing.

There are so many fascinating things in the world, all you have to do is open your eyes and look. I have the added advantage of being able to listen too. My real-world job is in medicine so I come face to face with patients every day, and they all have something interesting to say. The other day I had a patient that was talking about their childhood during the Second World War and they mentioned the Fire Watchers. Apparently children sat on the rooftops of buildings across ready to raise the alarm when they spotted a fire. Another patient mentioned that had been rebuilt several times. One of the originals is currently in somewhere! These small snippets of information provide a starting point or an interesting focal point for a story. What if the Fire Watchers saw something they shouldn’t - a murder or a German spy? What if something intriguing or secret was discovered when was dismantled?

I have a book with odd words and phrases scribbled in. Sometimes one word will spark a chain of events in my mind or be the core to an idea. I have a genuine interest in so many things that writing is a great way for me to learn about them as I write. For example - there is one book I am working on that is set in in the 1600's, so I have enjoyed researching that period, and especially looking through ancient maps of to see how it has changed over the years. That way I get a feel for where my characters are living.

I also use social media for inspiration. Sites like Google+ or Pinterest are visually driven so there are some incredible photos on there. If I come across an image of a location that excites me, I often have them open on my laptop screen so that I can look at them whilst I write a part of my book that may be set there. It helps with descriptions and realism when converting thoughts into words.

My latest book to be published is a humorous detective story. The inspiration for that started many years ago when I was just eighteen years old. I had drawn a picture of an old fashioned film noir detective in a sepia suit and fedora hat. In the picture I drew shadows in the window of the detective agency door of someone being strangled, but the detective is oblivious to it. He's too interested in the mysterious piece of paper that's been delivered. I liked the idea of a detective that was totally blinded by everything that goes on around him, but for that to happen I knew the story would have to be light hearted. In the late 1990's I wrote the first draft of the Professor Brown book but left it on the shelf until 2013, when I rewrote it, taking out the alcohol and sexual references to make it suitable for a younger audience.

Inspiration can come from anywhere and anything; a conversation, a book, a film, social media, history, plants, and nature. Just find something you find interesting or intriguing and build a story around it. 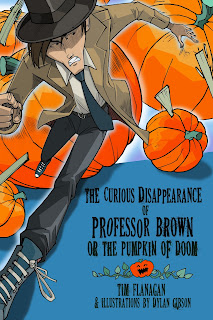 The Curious Disappearance of Professor Brown, or The Pumpkins of Doom.

Pinkley's skills are called into play in the first case of a reluctant career.

One night, in a high security laboratory, a scientist mysteriously disappears, leaving behind an overly nervous assistant and a trail of pumpkin juice. Pinkley is hired to investigate the disappearance by the professors beautiful daughter, forcing him to quickly learn the skills he needs to solve his first major crime.

But every move Pinkley makes is being watched.

As he blunders from one clue to the next he stumbles across secret messages, talking pumpkins, the Russian mafia, and hired hitmen. His life now depends on him solving the case. Not to mention the future of mankind! 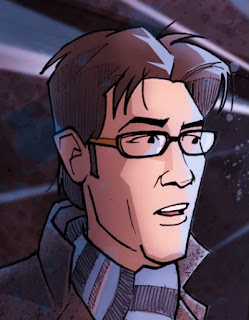 At some point in Tim's childhood, he was abducted by aliens and sent on a voyage of knowledge and discovery across the universe. Eventually the aliens realised how pointless this was and, as a failed student, he was returned to Earth and left with a family who brought him up as a human bean. But, the persistent memories of new worlds, dragons and other creatures, continued to knock at his frontal lobe, desperately trying to break out.

To avoid making a mess and calm his imagination, Tim began writing as a way to communicate with Earthlings. Fuelled by Chilli and Nachos and a bottle of wine, Tim manages to balance a love of loud rock music and fast cars (preferably red!) with emotional chic flicks, smart leather shoes and a well tailored suit. He has successfully infiltrated the humans and hides behind the façade known as a family. He learns from his children, but is regularly told to stop acting like a child by his wife.

Naturally shy and unsociable by nature, he is selective of the human company he keeps, preferring to be around old books, bonsai and art. He cries at 'It’s a wonderful life' but sulks if fed evil vegetables disguised as Parsnips or Peas. He is bored by mundane conversation, excited by architecture and castles and fuelled by Caramel Latte Macchiato's.

Occasionally, he likes to catch up with old acquaintances on Tatooine, Westeros, and Middle Earth, and stare at fantasy and concept art as if it is a window to his childhood adventures. He is always trying to learn lessons from the masters; Mr Charles Darwin and Mr Lionel Ritchie, about life and love. Tim's galactic mission is to translate his brain activity into a language that inspires and entertains you, transports you to different worlds and grants you an audience with the characters you have dreamt about, but never dared to remember. All of this in an attempt to redeem himself with his childhood alien abductors and travel the stars once more.

The Curious Disappearance of Professor Brown

My blog is the best place to get an insight into my mind. There are various posts and videos that have nothing to do with writing, sometimes just things that made me laugh or made me think.
www.timflanaganauthor.wordpress.com

Posted by Anonymous at 9:30 AM