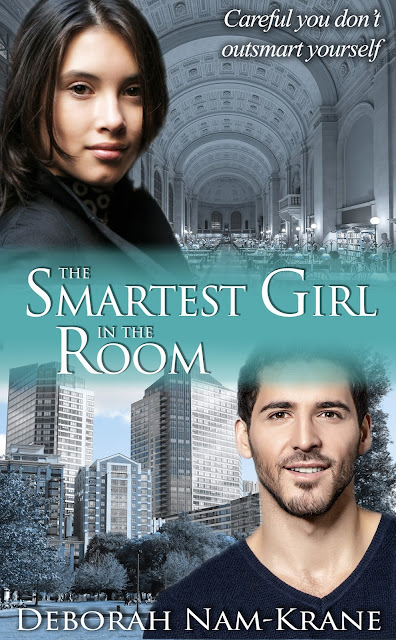 As soon as Drew was out of sight, Emily pointed at Zainab.  “You didn’t help.”
Zainab couldn’t stop laughing.  “I wanted to, but it was too funny.”
Emily narrowed her eyes.  “As funny as SGC?  Z, how are you going to do that and school?  From here?  And what about finals?”
Zainab rolled her eyes.  “Still a while before finals.”
“Uh huh.  And Joe isn’t exerting more pressure than he should be, is he?”
“I don’t know.  Ask his girlfriend.”
“Right, because he’s so faithful.”  Joe was such smiley smarm, and she couldn't understand Zainab's crush.
“Jesus!” Zainab snapped.  “For the last time, I am not sleeping with Joe Welles!”
“That’s good to hear, he’s a clown!”  Emily turned around and found herself staring into the most gorgeous pair of green eyes she had ever seen.  Zooming out, she noticed dark, thick, eyebrows, then the olive skin, high cheekbones and wavy light brown hair.  Not to mention the perfect teeth on full display in a wide-open smile.  “And why would someone as lovely as you be worried about Zainab being with such a dork?” said the gorgeous stranger in a nice deep voice.
Emily found her own voice after a moment.  “Got to watch out for my girl in that SGC cesspool.”
“Should I be insulted before we’ve even been introduced?” said the stranger.
“Emily, Mitch- Mitch, Emily,” said Zainab.  Emily stuck out her hand and it was enveloped in Mitch’s warm, strong grip.
“Pleased to meet you,” Emily said and looked at Zainab, then looked back at Mitch.  “And how do you know VP Welles?”
Mitch winked.  “Apparently the same way you do if you’re using that overblown title.”
Emily shrugged.  “’Popularity Contest Winner’ just doesn’t have the same ring to it.”
The perfect teeth again.  “But I like that.  Why don’t we shorten that to PCW so we’re all on the same page?” suggested Mitch.
“Agreed.  So tell me, who are you in the SGC?”
“Mitchell Graham, member-at-large, doing time on the BRC.”
“Since when?”
“About two months ago.”
“I must have just missed you.”
“My loss,” said Mitch.
Zainab cleared her throat.  “Mitch, babe, why don’t you get yourself a drink while Emily thinks of a comeback?”
“Did you plan this?” Emily whispered as soon as Mitch was out of earshot.
“I might have mentioned that he should meet me here tonight, right about now, when I know you’re usually done at the library,” Zainab whispered back.
Emily looked down at the ground and laughed.  “Aren’t you thoughtful?”
Mitch returned and sat down next to Emily.  “So, what made you decide to leave the SGC?”
“I thought Star Trek was a better use of my time,” Emily smirked.
“Star Trek?!?" His eyes popped.  "Oh my God, no one told me this was one or the other!”
“You’re a Trekkie?” Emily gasped.
Zainab shook her head.  “Em, the twenty-first century word is ‘Trekker.’”
“Zainab, you too?” Mitch said excitedly.  “How come you never mentioned this?”
“It doesn’t usually come up in civilized conversation.  Besides, I’m not into The Original Series.  Kirk is such a womanizing caricature.”
“Ugh!” Emily and Mitch both laughed at the same time.  “Okay, first of all,” Mitch leaned forward, “can’t argue with the womanizing, but he’s got some standout episodes.  I mean, ‘City on the Edge of Forever’ chokes me up every time-“
“Well, yeah!" Emily nodded.  "It’s one of the few where he isn’t all ‘My ship!’”
“Exactly!” Mitch almost shouted.  “And, I don’t know about you, but I was always much more into Spock than I was Kirk.”
Emily sighed and put her hand on her chest.  “Oh my God, Leonard Nimoy.  Spock was the most perfect character ever.  Handsome, brilliant, tortured… what girl wouldn’t want to rescue him from himself?”


Mitch grinned.  "I had no idea dysfunction was so attractive."

"...This is a charmingly observant look at relationships, friendship, and romance. The story is set in Boston. As I read, I got a great feel for student life on the small Boston campus. I never much warmed up to Mitch again after that first royal debacle. Thankfully, at least, Emily did not make it easy for Mitch to worm his way back into her affections. Personally, I think he should have been kicked to the curb, but you decide, maybe you will feel more charitable." L. Jenkins

"I so enjoyed meeting Emily & Zainab and all the great characters in this book. Emily is a strong young woman who has some difficult decisions to make and some hardships to overcome but she does it with grace and style but as a reader you have to keep reading to see how it will end up. There are tears, moments of laughter, and an ending which is happy but leaves you wanting more. I can only hope that in the future books I'll learn more about these great characters. It's a great read and I truly enjoyed it. I can't wait to see what else this new Indie Author will come out with. I will be reading when she does!" QMC

"This was an enjoyable journey which caught me by surprise. This was my first NA book and I found myself drawn in to Emily’s world willingly. She is a lot different than other girls her age. She showed maturity in many situations and such things made me smile as I reflected on the many childish things I did in my 20's. She is a lead that stands out among other characters her age. She had her faults just like everyone else in the world and seeing her overcome them was an enjoyable experience. Can’t wait to read the next book in the series.