The Golden Boy Returns (Book 5 of The New Pioneers) 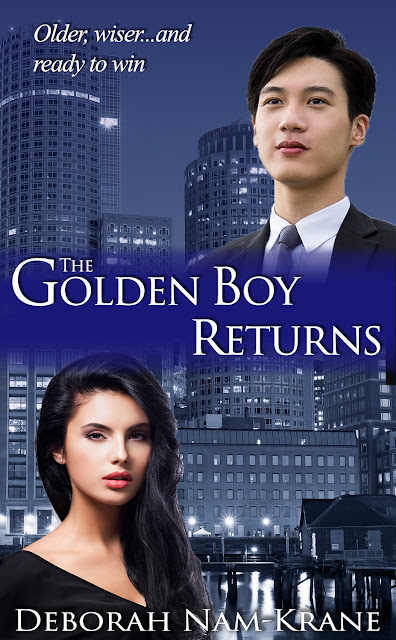 David Hwang was idealistic, smart, and hard-working—and he wanted to help. Powerful Lucy Bartolome recognized his talent right away, but first he needed to smooth out his rough edges. He’d need every lesson she’d taught him if he was going to run for mayor of Boston—again.

Kasi Panchal was smart and hard-working, but she’d seen too much for too long to be idealistic. Something about David Hwang made her believe in a lot of things she’d given up on—including herself.

Zainab Hendrickson and Emily Graham knew David and Kasi could make things happen if they joined forces. Of course they’re right, but can those two get out of their way long enough to see it too?

Zainab had insisted that they pick Kasi up from her apartment in Brighton. "You're going to be wearing heels, and you can't take the train in those."
"I do it all the time," Kasi had replied.
"Then let someone help you out just once," Zainab had said evenly, and Kasi didn't have a comeback.
"Don't you look lovely!" Emily greeted her as she and Zainab pulled up to her curb.
Kasi got into the back seat and Zainab started driving again. "I should probably let you guys know that I haven't been able to speak to David yet," she said bravely. "But I did leave a message with his assistant."
Emily turned her head sharply to face Zainab. "So he at least knows we're going to be there, right?"
"Yes," Zainab answered in exasperation. "We just might have to pull him aside if we want to talk to him."
"Maybe it's better this way," Kasi said. "It's always better to have the element of surprise on your side."
Emily turned around. "I thought David was on our side."
"He will be," Zainab said confidently.
They arrived at the hotel twenty minutes later. The woman checking them in nodded when she saw them on the list and personally escorted them to a small, empty function room. "Just a moment."
"What's going on?" Kasi asked Zainab.
Zainab shrugged. "Maybe we're early for the Meet and Greet?"
"God bless that Hendrickson money," Emily muttered as she looked at her watch, "but we're not early."
"Screw it," Kasi said as she walked over to the table with appetizers. "I didn't eat much for lunch." Zainab and Emily shrugged, then got plates of food as well and sat down.
The door opened again two minutes later. "Zainab Oginabe-Kensit, are you kidding me?!" David grinned from ear to ear as Zainab stood up and hugged him. Kasi had never seen him this close before. He was taller than she’d thought he’d be, and not nearly as thin.
And very handsome, she thought as she bit the inside of her lip.
Zainab stood back from David. "I kid you not! But do you want to explain putting us into Siberia?"
"They're giving out wine and fruit in Siberia now? Sign me up!" David said with a laugh. "And are you going to introduce me?" Kasi noticed he wasn't answering the question.
Emily stood up. "Nice to see you again," she said as she put out her hand. "I'm Emily—"
David rolled his eyes and pulled her into a hug. "I remember you, Emily Graham. You became a little bit of a legend after you graduated. And how is the law treating Mitch?"
Emily groaned. "He’s going to be Richard’s in-house counsel as soon as he can wrap up the last bit of his work at the firm."
"Smart guy as usual," David said. "Except for the part about missing your party that time."
Emily chuckled. "That was mostly Jessie’s deal, if I’m perfectly honest."
"Jessie Bartolome?"
"Soon-to-be Jessie Shepard, yes."
Kasi noticed that his eyebrow was raised ever-so-slightly. "And I'm Kasi Panchal," she said as she walked over. She didn't offer her hand but nodded slightly. Let's see.
A look passed over his face. Recognition, she assured herself, but she was blushing again. He put out his hand. "Paloma's campaign manager?"
"The one and only," she said as she took his hand. Now pretend you don't know and ask me how she's doing so I can get the Hell out of here.
He shook her hand firmly. "Pleased to meet you. I've heard good things."
"As have I," Kasi returned. Now she was impressed. "And thank you for the privacy. It's appreciated."
David smiled slightly. "Would someone like to tell me what's going on then?"
Zainab put her hands on her hips. "How would you like to be the representative for the Seventh District?"

"I've loved The New Pioneers series from the start. The good relationships, toxic relationships, and backstabbing are all intricately woven together, and each story gets better and better. My favorite characters from the series are all still around (especially my favorite bad boy Michael Abbot), but this book focuses more on a few new characters who have plenty of drama of their own.

The author has a swift grasp of politics that shines through her writing and a way of making the reader feel sympathetic to even the most twisted and rotten characters. Her way of making future generations pay for "the sins of the father" is masterful." Caroline Fardig