Let's Move On (Book 4 of The New Pioneers) 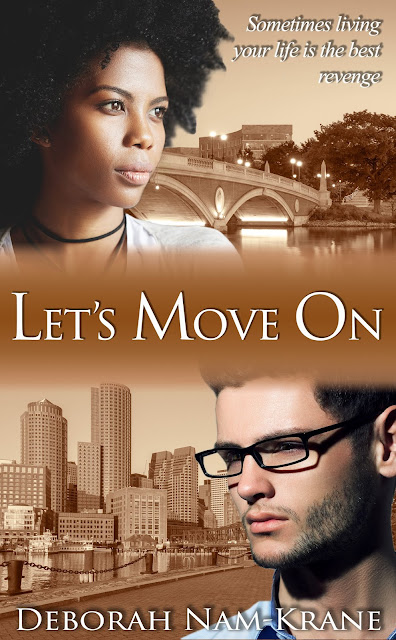 Zainab has spent years keeping Emily from going over the edge, giving Miranda a shoulder to cry on and nursing Jessie back to health. They'll be the first to agree that she deserves whatever makes her happy, especially after the drama Richard put her through. But did she have to choose the guy who threw everyone's lives into the shredder?


Richard knows he screwed up and he'd do anything to get Zainab back, but first he needs to make sure his company—and his loyal employees—don't go under. (Who knew kicking your primary investor to the curb would have consequences?) Good thing his family has such deep pockets; too bad he doesn't want to take a cent from them. Why should Zainab take him back if he can't get out of his own way?
Maybe Zainab can eat her cake and have it too—that is, until she's given an ultimatum. The choice isn't Lover A or B; it's protecting her friends or letting them fend for themselves. With that hanging over her head, what's it going to take to make sure she and everyone else can finally move on?

Jessie knew Zainab’s schedule that week. She used the key she’d finagled from Emily and let herself in. She grabbed a cupcake, then spotted some of the leftover Pasta della California from the night before. Score, she thought. She was lucky any was leftover. And then it occurred to her. Zainab hadn’t been home last night to eat it.
Zainab came home an hour later to find Jessie sitting on the couch with Hellie watching Pucca. They were both giggling. Zainab sat on the couch with them. "Where’s the baby sitter?" Zainab asked at the commercial.
"I told her she could go. I don’t get as much of an opportunity to hang out with my favorite little girlfriend."
"Is that me?" Hellie asked.
"That’s you," Jessie said as she kissed the top of her head. "But now I need to talk to my other bestest girlfriend, so you need to stay here while we go into the kitchen, okay?"
"Why can’t you talk in here?" Hellie pouted.
"Because then you won’t be able to hear Pucca," Jessie said as the show came back on.
"Okay, bye!" Hellie said as she turned back to the TV.
"Is everything okay?" Zainab asked softly as soon as they stepped behind the glass doors. "Is the new therapist okay?"
"The—? Yeah, she’s fine. I got the referral from Michael’s guy, and then Richard did a background check and might even have done a DNA swab when he met her, so I think I’m good to go."
"And what about...Tom Bartolome?"
Jessie smiled wryly. "You mean my aunt’s brother? The man who raped and murdered my mother, and may very well have been threatening to do the same to Miranda? My father?"
"Yes, that is the Tom Bartolome I was thinking of."
"Aunt Lucy has about nineteen of the best lawyers in Europe and the US working on the case. He’ll go to prison in exchange for getting his assets back. I’ll let him have them as long as he agrees to rot in prison for the rest of his miserable life, but Lucy seems to feel like I should retain the assets on principle. Whatever. He can try whatever he wants. It doesn’t matter, because he’s not getting out."
"Jess, you know I’m here to talk about this whenever. At work, at home—just call me, I’ll meet you anywhere."
"Thanks," Jessie said evenly, "but that actually isn’t what I want to talk to you about."
"Jess, we’re not talking about Richard."
"Oh, I’ll say."
"Then what’s wrong?"
"I visited Hellie a couple of days ago. She wanted to dance with me. She started singing something, but I didn’t recognize it. I asked her to tell me what it was, and she said Auntie Zainab was singing a song the night before and dancing to it."
Zainab straightened up. "Yeah?"
"Yeah. Tell me, since when did you develop a taste for bossa nova?"
In the back of her mind, Zainab had pictured having this conversation with Emily or Mitch or Richard. She’d never even wanted to imagine having it with Jessie. "Jess, I’m sorry."
"He’s kind of bad news."
"I know what he did Jess, and I know especially what he did to you. I’m sorry, I’m not trying to hurt you."
Jessie smiled. Only Zainab and Hellie ever saw Jessie’s gentle smile. "I know. And you’re not. I’m not worried about me, believe it or not. I’m worried about you."
"Don’t."
"What the Hell are you thinking? I know Richard screwed you over and believe me I accost him about it every chance I get, but why Teague?"
"I like him."
"Why?"
"I don’t know." Zainab took a deep breath. "He’s good to talk to."
"Oh sure—because he knows you so well. He has a complete dossier on all of us. Jesus, he makes Michael look disinterested and well-adjusted by comparison."
"He went over the line. I know that. I’m not going to defend him because what he did was indefensible."
Jessie pursed her lips. "And that doesn’t worry you at all?"
"No." Zainab sighed and looked at the counter. "Jess, this isn’t...what I had with Richard. It’s something else. It’s something I like and it’s something I want to do, but I don’t have the same expectations."
"You had too few with Richard, and I don’t feel good about you having fewer with Teague. He’ll take advantage of you."
Zainab looked back, and Jessie smiled when she saw her face. "No, he won’t. No one takes advantage of me anymore."
"You promise?"
"I promise."
Jessie sighed. "That’s all I needed to hear then."
Zainab looked at her for a moment. "So...what does this mean?"
"As far as you and me? It doesn’t change anything. I’m not going to say anything to Richard, because I don’t think he has a right to know." Jessie bobbed her head a little bit. "I’m also not going to say anything to Emily, because...I don’t need the drama."
"Thank you."
"But you need to ask yourself how long you want to keep this a secret."
Zainab was about to say something when Hellie whined from the living room. "Pucca’s over!"

"Hold on for a exciting end to what has been one of my favourite series. Emily, Miranda, Jessie, and Zainab are characters who have stayed with me for some two years now as I was fortunate to get my hands on an advanced review copy of the first in this series, The Smartest Girl in the Room.
What's been spectacular in this series is the way Deborah Nam-Krane has developed the lives of these characters as they've grown from young adults into mature well rounded people, albeit with a few issues. For me, where the focus of each book has been on one character, you're still able to follow your favourite characters from previous books and watch as their lives develop beyond their previous stories. In Let's Move On, you finally get to Zainab's story. Zainab has been the rock on which all of the cast of characters in The New Pioneers series rely on. She's the glue that's kept them all together during their many crises. But will they do the same for her now her life has gone to pot? With her ex Richard cheating on her, will they stand by her when they learn she sleeping with the enemy? And just when you thought no one could hide anything from anyone ever again, boo! Another skeleton is dragged out of the closet. Such fun!" Erin Cawood