The Family You Choose (Book 2 of The New Pioneers) 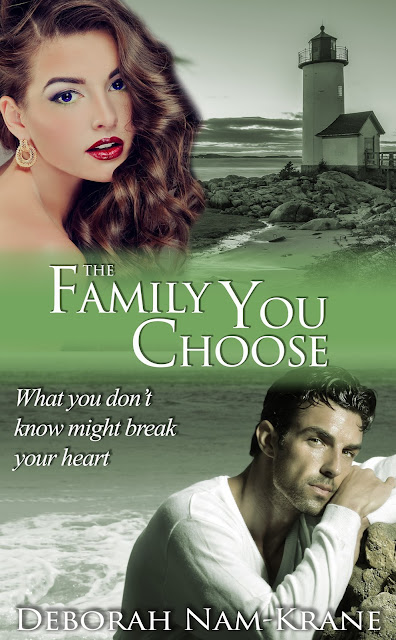 Miranda Harel has been in love with her guardian Alex Sheldon since she was five years old, and Michael Abbot has despised them both for just as long. When Miranda finds out why she wants both men out of her life for good and questions everything she believed about where and who she came from. Finding out the truth will break her heart. Without family or true love, will her friends be enough to bring her back?

Miranda had a recurring dream. She was sleeping in a bed in a small room when her beautiful, blonde, green-eyed mother walked in and sat on the bed with her. She was wearing a black dress. They would talk for a few minutes and sometimes her mother would stroke her hair or tickle her, but she was always smiling. In the dream Miranda knew her mother was happy to be with her. As Miranda grew, the conversations were different, but they didn’t matter. The dream always ended the same way. Her mother would kiss her goodnight and tell her that she loved her, then turn off the light and close the door.
Sometimes Miranda would wake up crying for her mother, even now, although not as loudly as she used to. Sometimes she would wake up but close her eyes tightly, to try and hold onto the dream. Because Miranda didn’t remember her mother except for that dream, and she couldn’t be sure if her mother’s hair had really been that thick or her eyes that green. The only thing she could be sure of was that her mother had loved her, but that wasn’t something she remembered, it was just something she knew.
Miranda’s first real memory was a rainy day in a tiny garden. There were drops of rain on white honeysuckles. A sad older woman with white hair and green eyes smiled as Miranda put the flower to her mouth and sucked out the nectar. She remembered thinking that it was the best thing ever, and that now everything would be alright. But she didn’t remember what had been wrong in the first place.
When she was a little girl she had often asked Alex about the garden. Alex would smile and say that someday he’d take her there again. But she could tell it made him sad like the old woman, so she stopped asking by the time she was twelve. Now, every once in a while, she remembered the garden and the old woman and made a note that she’d have to ask Alex to at least tell her where it was.
Miranda’s first memory of Alex was from when she was five. She remembered that she was wearing a light beige dress with small pink flowers and a sash that tied in the back. He was sitting on a chair in a living room, across from the old woman, who was sitting on a couch. The couch and the chair had flowers, just like her dress. Those were the things you noticed when you were five.
She couldn’t take her eyes off of him. She thought he was the most wonderful thing she’d ever seen. His hair was darker back then, and he had been wearing a dark red sweater. Burgundy. She had taught herself that color, because it was Alex’s favorite, and it became her favorite on him. She loved the way it made his brown eyes stand out.
She had walked over to the old woman and taken her hand, then looked down at the floor while she talked. She didn’t remember what was said. But she did remember Alex’s voice. “Would you like to come and live with me?” he’d asked. And then she’d looked up, and she remembered that she’d smiled. He smiled too; he hadn’t been smiling before. Even as a small child, she knew that they were going to love each other forever.
She remembered hugging the old woman goodbye. She didn’t remember because she wanted to. She remembered because she couldn’t forget. It was a forever goodbye, which she knew even though no one had told her. She remembered that she cried, and that she had cried in the car. But Alex had said that she could use the phone at her new house to call the old woman whenever she wanted to, and they stopped to get some ice cream before he took her to her new home, her forever home.
Years later, she’d put it together. Her mother had died. The old woman was her grandmother, and Alex, her mother’s friend, had come to take care of her. But that wasn’t what was important. What was important was that she had loved Alex from that day forward.
Miranda knew that he loved her too, but she knew that it was different because his love always came with distance. For all the times that he would read stories to her, or take her on day trips to the circus or the aquarium or to museums with Richard, Michael and even Jessie, for all the times he’d ask her about her life and truly wanted to know, there were just as many times when he would push her away.  There were the boarding schools she used to plot frequent escapes from (which was how she knew how to help Jessie, when that time came), the frequent trips overseas that she couldn’t go on, the obvious hints about the women in his life and, always, the distant look of regret.
Miranda knew that people didn’t always like Alex, but she loved him completely and she knew that he loved her too. It had never been a crush; Miranda had always been very serious about it, and hadn’t become any less so as she got older.
She was one long, never spoken question…What if? Why not? The words may have grown more sophisticated with age and the sentences might have been a little longer, but it was still the same question. He was one to reply in short, sorrowful answers; and with age, it seemed his answers had gotten shorter. But she would not give up, because she knew that the fact that he couldn’t say that he loved her didn’t mean that he didn’t want to.


That was how she knew that Mitch and Emily could be together because, despite everything that happened after they’d met, they loved each other; even if they’d been too stubborn to admit it, nothing, other than their stubbornness and pride, was separating them. Such things were surmountable. So, Miranda knew, it wasn’t anything real that was keeping Alex from her. She just had to convince him of that.
Reviews

"Building on her characters from 'The Smartest Girl in the Room' (a book I also recommend) Nam-Krane weaves an assured narrative, delving into the romantic, social and economic lives of her characters (characters who are genuine and real enough that I can't wait to check in with them again in Book 3 of The New Pioneers.) The tragic relationship between Miranda and Michael is important, but the real story here is Miranda's struggle and growth as she learns more about the circumstances of her birth and subsequent childhood.

If you want a complicated and rewarding story, with characters who feel like people you know (or want to know), check out 'The Family You Choose'!" Matt Nicely

"Engrossing, and a great read. Miranda's character just scratches the surface in the 1st of The New Pioneers Series, "The Smartest Girl in the Room." I am simply blown away by "The Family You Choose." It's well written gritty story line keeps you drawn in wanting more. I read this book in one day- non stop (although I did have to go to the doctors for 2 hrs- I read as soon as I got back!). It was a page turner that I just couldn't put down. I am left wanting more. I know Miranda better and I feel for her. I feel for Michael too which is odd as I did not like him at first. I still don't love him but I do feel for him, understand how he thinks more. I am truly in love with the series and I can't wait to read the next one...A great read." lovetoread

"The second installment or should I say season of The New Pioneers Series, my favorite new show (check out the awesome cast), is focusing on Emily's friend Miranda Harel and her...family. Right at the beginning when the word guardian appeared on the page and I thought, a 23 year old still living with her legal guardian? Nineteen century style novel, those men always ended up marrying her ward...right? Oh but there is another man living with them, Michael and he has been making Miranda's life a living hell. You know what they say when a boy always picks on a girl. He lacks sociable skills...
The trouble is that from the first book we already know Micheal is very bad news. I mean, awful bad news, unmentionable news... Deborah didn't hold any punches when she created this one. Do you still have some nails left? Mine are all gone!
But there's always more to story and trust me it will keep you guessing on the edge of your seat, screaming at your Android phone/iPad/kindle/book, questioning your own life's choices and starting long conversations maybe even a few debates. Poor Miranda, she's a few years older than Emily was in the first book but her friends and I had to question her judgement a lot...not like they're doing any better themselves! (SPOILER)
The Family You Choose is a more complex book than its predecessor. It's written beautifully and it has so many great characters. The ones you root for (Richard, Richard!!!), the ones you just love to hate (Alex, Alex!!!), the ones who still haven't learnt their lesson (Mitch, Mitch!!!), the Mother Hen (Zainab, Zainab!!!)...
But don't take my word for it, join the movement and let's spark a little debate about old money, old families and their old dirty secrets! Yes, I love this book!" Danielle-Claude